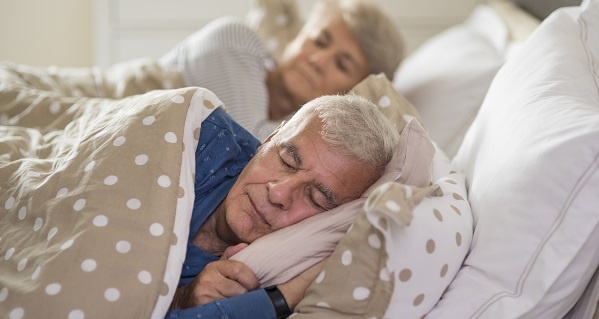 Can the amount of sleep you get impact your risk of developing Alzheimer's? Recent studies suggest that there is indeed a link between sleep apnea and Alzheimer's. Sleep apnea is a breathing condition where a person stops breathing multiple times during the night, resulting in poor quality sleep and fatigue during the day. Sleep apnea has been linked to a host of health problems, including high blood pressure, risk of stroke, and heart disease. It should be no surprise that it is now linked to Alzheimer's as well. Let's learn more about these studies and what you can do to reduce your risk of Alzheimer's.

New research suggests a link between sleep apnea and Alzheimer's disease. Brain scans of those with sleep apnea show a buildup of a certain kind of plaque, called beta-amyloid, which is one of the key markers of Alzheimer's.

While scientists still aren't quite sure why sleep apnea causes a buildup of beta-amyloid, some think it's because of a lack of REM sleep. When sleep is interrupted multiple times during the night, the brain can't enter deeper levels of sleep, like REM. REM sleep has lots of important functions for the body and brain, including clearing away toxins from the brain. If these toxins are allowed to build up because of a lack of deep sleep, those deprived of sleep usually suffer from decreased cognitive abilities. This might be the link between sleep apnea and Alzheimer's.

Additionally, the brain may not get as much oxygen during sleep apnea episodes. The lack of oxygen can put extra stress on the brain and alter the body's natural circadian rhythms. Interruptions in this process may also be linked to cognitive problems.

Whatever the cause of the buildup, this study indicates that individuals with sleep apnea could be more vulnerable to Alzheimer's as they age. However, the research also suggests that addressing sleep apnea in it's early stages might help slow the risk and progression of Alzheimer's.

It is also entirely possible that Alzheimer's is the ultimate cause of sleep apnea in a bidirectional relationship, leaving scientists in a conundrum like the question of the chicken and the egg.

More research is needed to confirm this connection. But if you or a loved one have problems sleeping, you may want to see a doctor to determine if you have sleep apnea. If diagnosed, you can begin treatment to reduce buildup and, hopefully, decrease your risk of developing dementia. Ultimately, good sleep leads to a healthier life.

If you would like to learn more about the risk factors of dementia, refer to our Family Caregiver's Guide to Alzheimer's & Dementia, which is available for FREE download. Access our content library by first locating a Caring office near you.