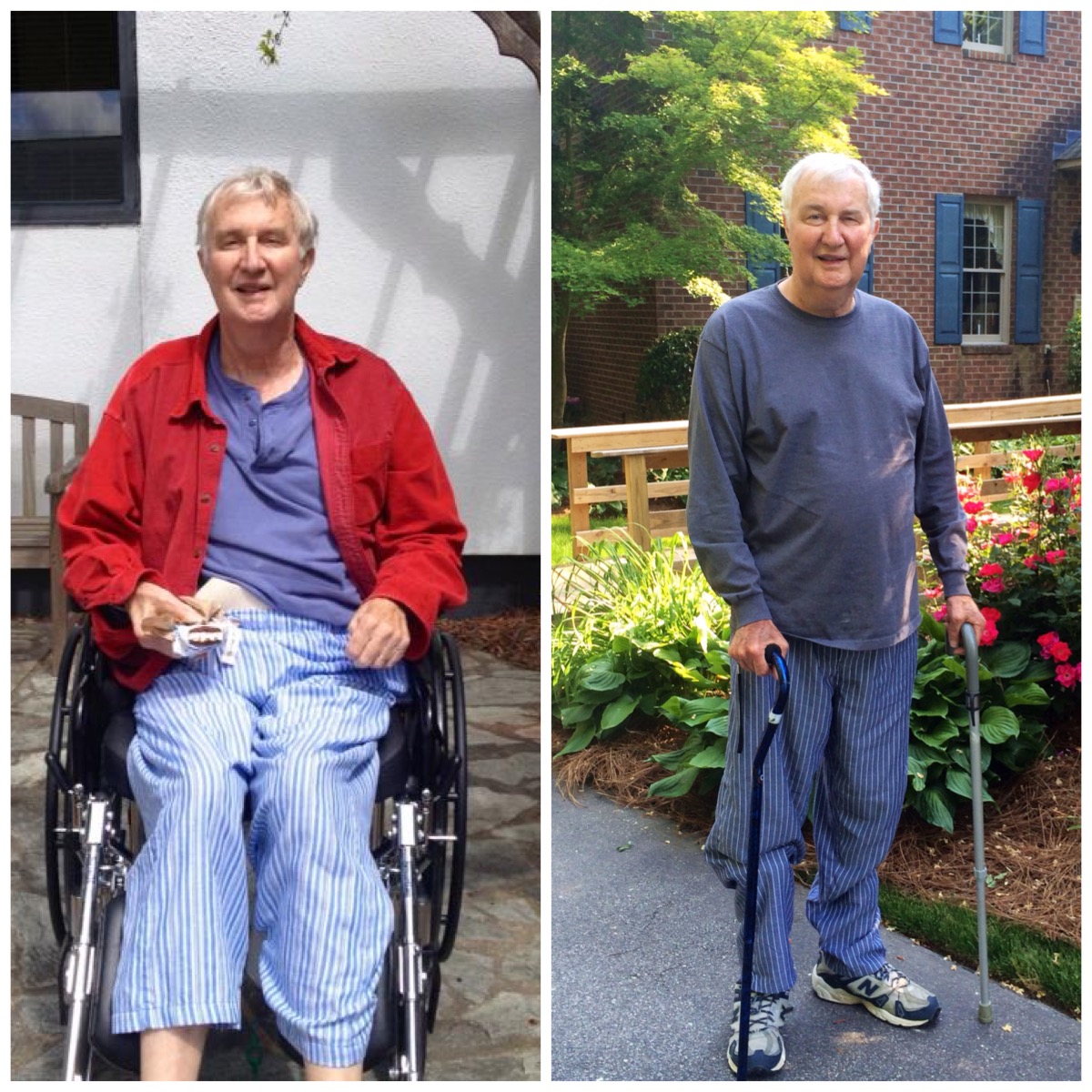 With new studies on healthy diets, exercise routines, and health care trends constantly appearing on the walls of social media, one caught our attention: "Having Goals Can Help Senior Citizens Stay Motivated in Old Age." With this study in mind we decided to do our own research on the subject. The end result is a collection of stories detailing 52 inspiring seniors who didn't let age stop them from pursuing their dreams or accomplishing their goals.

Our first story comes from our Wilmington, NC owner, Chris Gulley and details the journey of his dad and the incredible physical progress he has made after being diagnosed with Guillain-Barre Syndrome. Chris's dad is one of the main reasons Chris decided to join the Caring Senior Service family.

My dad was diagnosed on March 1, 2013 with Guillain-Barre Syndrome (GBS). It is a rare disorder in which your body's immune system attacks your nerves. Weakness and tingling in your extremities are usually the first symptoms. These sensations can quickly spread, eventually paralyzing your whole body.

In its most severe form, GBS is a medical emergency. There's no known cure for GBS. Most people do recover from GBS, however some experience lingering effects from it such as partial paralysis, weakness, numbness or fatigue. He has a very severe case and was almost totally paralyzed and unable to perform even the simplest of actions.

After diagnosis my dad, as well as the rest of the family's, lives were forever changed. We all pulled together and did whatever was necessary to help him and each other. I have learned that being a caregiver, especially when providing care to a beloved family member, is very difficult. The process is extremely hard both mentally and physically.

In our minds, we all hoped for a full recovery although there were no guarantees that this would happen or even be possible for my dad. We were told that if the nerves began to regenerate, the growth would be extremely slow, only about 1 millimeter per day. We wanted to be realistic so we began to view the effects of the illness as the "new norm" for our family but we also decided not to let it define us or stop us from doing the things we wanted to do.

My dad's case was very severe. He was confined to a wheelchair and couldn't even lift his legs. Despite this, he went to occupational and physical therapy 3 times a week. He also performed exercises whenever he got a chance at home.

In June 2014, only 4 months after my dad's diagnosis, something wonderful began to happen. My dad's dedication began to pay off and he slowly began to regain feeling in his extremities. Now, as of January 2015 my dad is again able to take steps on his own and with the addition of 2 walking canes he is back to his normal day-to-day routine.

He is able to perform most activities on his own and has regained his personal freedom. He is not fully recovered and there are no guarantees on further progress, however according to my dad's doctor and Head of Neurology at Duke, his progress is nothing short of a miracle.

There is no doubt in my mind that my dad's faith in God played a huge role in his recovery. It makes me think on what the doctor said on our initial visit, "The growth of your nerves is in God's hands."