Lew Hollander is the oldest person to finish a triathlon involving a 2.4-mile swim in the ocean, 112-mile bike ride, and a full 26.2-mile marathon all in less than 17 hours. This triathlon is better known as the IronMan Championship Triathalon and includes other famous athletes including John Maclean, Chris McCormack, and Julie Moss. Lew won the Guinness World Record for this achievement in fact in Kona, Hawaii on October 13, 2012.

Before competing in the IronMan competition, Lew was also a long-distance endurance horseback rider with his wife. The 2 competed in many races together, both always "cleaning house" as Lew told Eric Teplitz.

From there, Lew began to delve into running and biking though he wasn't the best at biking at first. He has gotten a lot better since he first began leading him to win over 50 IronMan races and around 50 other marathons. 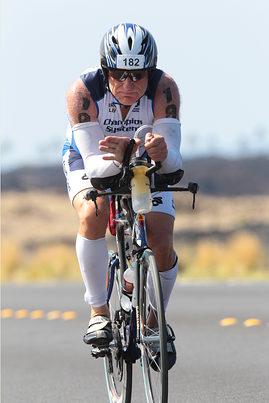 The inspiring thing is that Lew never thought that he was capable of such endurance. When he ran the Western States Endurance Run in 1984, he didn't think he could do it. "It was just unbelievable that you can learn that your body actually has capabilities you just have no concept of," he said of the race.

Lew qualified for the IronMan competition in Kona in 1985 at the age of 55. Since then, he has just never stopped competing in the triathlon. He finished his 20th IronMan race 24 years in 2009 at the age of 79.  Now, Lew is about to enter another Ironman competition, opening up a new age category (85-89 year-olds).

Lew really is able to show that age is no match for ambition or endurance. He is able to run through barren lava fields and against heavy winds among college aged students and still finishes first in his age bracket.

However, Lew really attributes his success to persistence, saying, "Persistence is they key to my life. You fall down, you get back up and you go again. I don't give up. That's been the motto of my life in business and science. I've never been really good at anything, I just stay with it."

You will see a lot more from Lew in the coming years. He is scheduled to compete in the IronMan competition again and still wakes up everyday to bike, run, or swim. To prove it, when asked about the highlight of his career, he has said "Well, I'm not done yet! I'm only 80 years-old now."