How Carmen Dell'Orefice Is Defeating Stereotypes About Aging 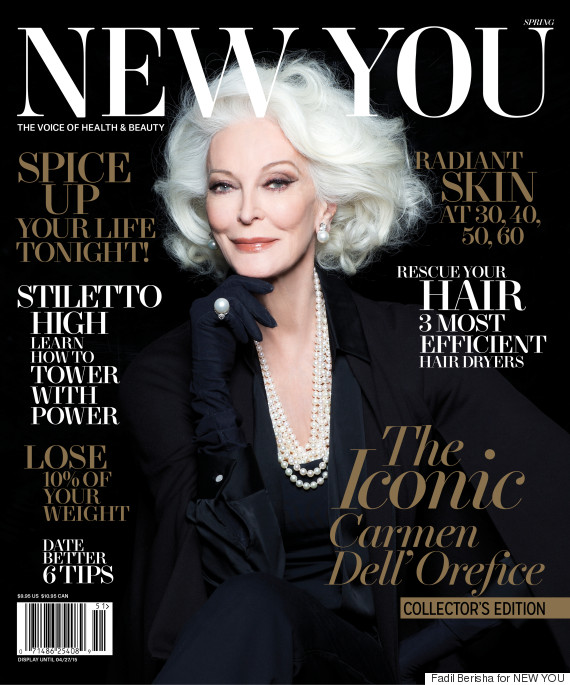 There's this attitude that when you get older, life slows down. You retire, you stop doing whatever your passion is, and you take up other hobbies. However, for many seniors, this isn't the case. Take Carmen Dell'Orefice as your example for this week. Carmen is 83 years-young and also a supermodel who has graced the front page of New You magazine. Let's learn more about what makes Carmen such an inspiration.

Carmen Dell'Orefice began her career in the modeling industry in 1944 at the age of 13. She was a boyish-looking teenager with heavy eyebrows and a porcelain face living in New York. Her features helped her get recognized by the wife of photographer Herman Landshoff who is known for his use motion and movement as well as for his affinity for black and white photography.

One day, while at home with her mom, Carmen received a note at her door from Landschoff. When she read it, she shouted at her mom that she was leaving. Then Carmen put on her roller skates to head over to the studio with her cocker spaniel on a leash as she went. The following year, she sat for Salvador Dalí before going on to work with some of the most celebrated photographers in the 20th century, including Cecil Beaton, Norman Parkinson and Richard Avedon. 2 years later, at the age of 15, she appeared on the cover of Vogue Magazine.

The thing is, modeling started out just as way for Carmen to have fun and earn enough money for her family to make rent. It was just her mom and her in a New York apartment and rent was $30 a month. In less than a month, Carmen learned that she could make over twice as much as the cost of rent. Meaning, she would no longer have have to wash her clothes in the bath tub or scramble to continue paying for their home every month.

Today, she has said that she has had more magazine covers in the last 25 years than she has had in her whole career. She is no longer the boy-ish looking teenager but a known and revered face around the world standing at 5'10". She is 3 to 4 times older than the average American model yet she is represented by Trump Model Management LCC and walks runways around the world.

After seeing herself on the cover of New You magazine, she said, "Today I am in a territory that business considers unmarketable: age and white hair.... Slowly, however, I started to own that territory little by little because I stood up for age."

Carmen believes that growing older is not an obstacle to overcome. Instead, it is a part of life that has given her valuable experiences and lessons as well as cherished memories with her friends and family. She has stated that without modeling, she never would have been given the opportunity to travel or take care of her mother growing up given her humble background.

Carmen's attitude is one of the reasons why she has continued to model for over 60 years. "Today I am in a territory that business considers unmarketable: age and white hair," Carmen said in an interview. Yet, she still walks runways in 3 to 4 inch heels, stays healthy, and poses for photographers around the world looking glamorous and domineering in front of the camera. Why? Because modeling is truly what she loves to do.

Carmen fits alongside many of our Golden Inspirations in that she has followed her passion. The best part about her story is that she found the ability to continue with her passion even in an industry that seems to value young talent.